Eyelight communicates to cyclists what is going on behind them through subtle vibrations on their wrist.

At the start of this project, my goal was to find ways to improve communication between cyclists and drivers on the road.
I conducted interviews and ran surveys with over 50 participants and found two key insights: firstly, cyclists long for feedback. They want to know if drivers have seen them, know where they are going, and whether or not they will let them out, and secondly, the common thread among the situations that cyclists find stressful is not knowing what the vehicles behind you are doing, especially when moving or turning right.

I decided to look into these findings further by attaching a camera to the back of my bike and filming the behaviour of the cars behind me as I cycled.
The interesting insight I found was that when indicating right (either to turn right, change lane or move round a parked vehicle), if the vehicle behind me was going to let me out, they would slow down slightly in recognition.

I then wanted to look into this insight further so made a code using Python and OpenCV that would detect and then track the movement the vehicle behind the cyclist, and then predict if was safe to move out or not.
The code worked surprisingly well and was able to track most vehicles successfully.
Next, I got the code working on a Raspberry Pi so that I could try it live on the bike. It was able to detect and track vehicles but still needs some refinement. 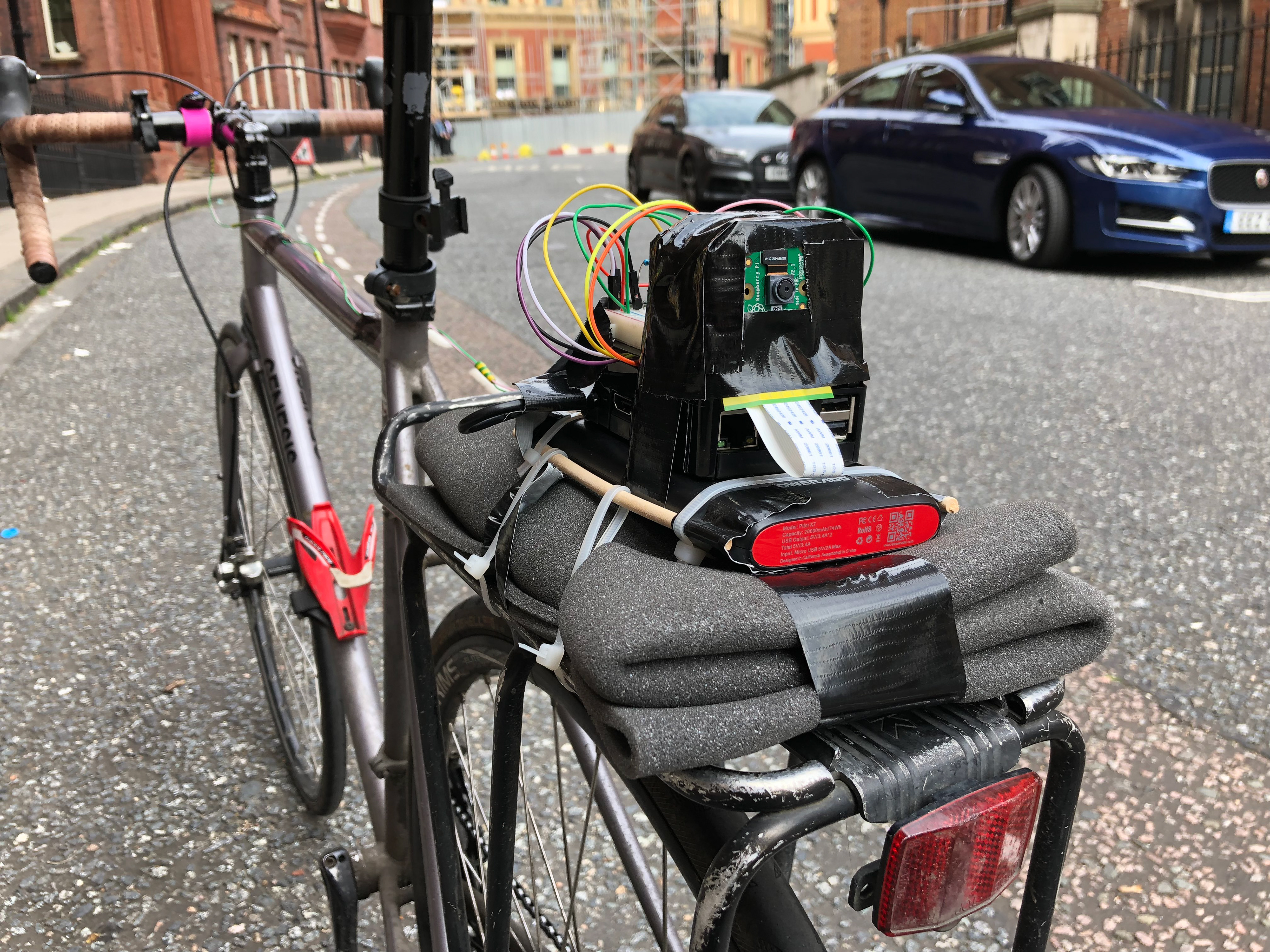 Once I had the engineering side of the project well covered, I decided to think about the design questions.
The first question was how to trigger the tracking system. I felt that the most human-centred way would be to use the gesture the cyclist would already be doing in that moment - indicating. I decided to measure the movement of the cyclist’s arm using a wristband.
The second question was how to convey what was going on behind to the cyclist. After considering multiple options, I concluded that simplicity was the most important factor to consider because the interaction would be extremely fast, and therefore decided to just tell the cyclist when it was safe to move out using a buzz on their wrist from the wristband.
I used a haptic driver board to explore different vibrations and made my own waveform that felt more inviting and reassuring than a strong, constant buzz to the wrist.
In the final stages of the project I worked on a ‘looks like’ prototype. I chose to house the camera and computer vision technology in a rear facing bike light and used foam board to prototype some possible forms. I also drew inspiration from a mood board of other products.

The final product allows the wristband to be placed on the bike light when not in use. It will charge by induction when wrapped around the light.